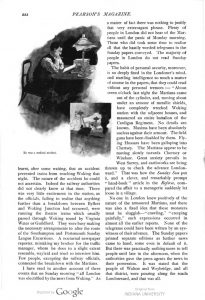 This image is a facsimile of page 222 of the fifth installment of The War of the Worlds as it was published in Pearson’s Magazine in August of 1897. The illustration by Warwick Goble on page 222 takes up roughly the top right-hand quarter of the page. It bears the caption, “He was a medical student,” “he” referring to the narrator’s brother. The brother is sitting with his elbows on a desk and his hands on his chin. He is staring down at a book. A lamp stands on the desk in front of him, and about half a dozen books are stacked behind it. Another small inset image overlaps the bottom right portion of this image. It shows the body of a Martian fighting machine emerging from a pit, with two other fighting machines in the background and a plume of black smoke rising from the ground near the pit.