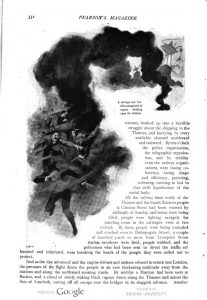 This image is a facsimile of page 332 of the sixth installment of The War of the Worlds as it was published in Pearson’s Magazine in September of 1897. The illustration by Warwick Goble on page 332 takes up the top third of the page as well as most of its left side. It is shaped so that the text is not separated into two columns, but rather one large one that widens as it molds around the illustration, and the final paragraph spans the entire width of the page. In the top right-hand corner of the image, the silhouettes of three fighting machines are blowing black smoke as they were on page 229. The smoke flows out to the left side of the page and down onto a mass of people, who are screaming and running through the smoke toward the viewer. The caption reads, “A strange and horrible antagonist of vapour striding upon its victims.”