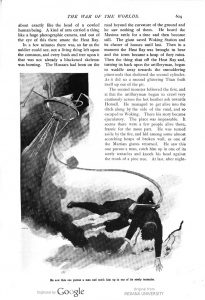 This image is a facsimile of page 609 of the third installment of The War of the Worlds as it was published in Pearson’s Magazine in June of 1897. The illustration by Warwick Goble on page 609 takes up roughly the bottom three-quarters of the left column and bottom one-third of the right column. On the left side looms a Martian fighting machine standing in a plume of black smoke that is rising from the ground in the bottom right-hand corner of the image. A man is held above the ground by a tentacle extending from the Martian’s body. The end of the tentacle has a tong-like claw that is clamped around the man’s waist. His head is bowed and limbs are lifeless. The caption reads, “He saw this one pursue a man and catch him up in one of its steely tentacles.”