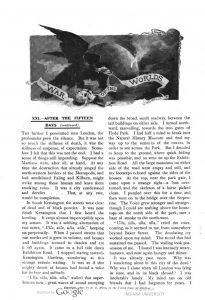 This image is a facsimile of page 736 of the ninth installment of The War of the Worlds as it was published in Pearson’s Magazine in December of 1897. The top third of page 736 is a rectangular title image by Warwick Goble that is the same as the header for Installment 6. The title and author of the novel are drawn on a wide ribbon that is held in a large vulture’s beak. Its head is centered in the image with its body out to the left side of the image, wings raised. It stands, claws extended, on a human skull. The ribbon seems to thread through the skull’s jaws as well. Behind the vulture is a large sphere, which we presume is either Earth or Mars; it is difficult to tell based on the shading. On the right side of the sphere, smoke rises from a bright point of light that could be an explosion or fire. The smoke leads up into the top right-hand corner of the image, where a small octopus-like Martian perches with tentacles reaching out across the top and down the side of the image. The remainder of the page is two columns of text.