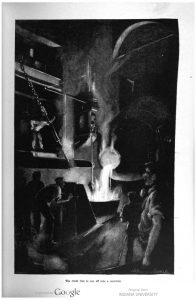 This image is a facsimile of page 293 of the March 1897 issue of Pearson’s Magazine. Page 293 is a full-page rectangular image by Warwick Goble. Its caption reads, “The crude iron is run off into a converter.” In the foreground of the image, a man on the right watches as several other men farther back stand around a large bowl, into which pours brightly-colored molten metal from a jug-like container held in place by a giant frame that allows it to swivel forward. The molten iron is in bright contrast to the rest of the image, which is shaded quite darkly.