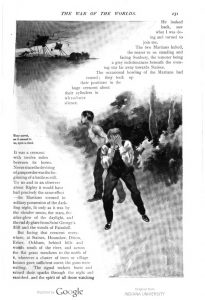 This image is a facsimile of page 231 of the fifth installment of The War of the Worlds as it was published in Pearson’s Magazine in August of 1897. The illustration by Warwick Goble on page 231 diagonally bisects the page from the top left-hand corner down to the bottom right-hand corner, with the right side dominating most of that part of the page. This makes the order of the text on the page very difficult to discern without context from the previous and following pages. Text in sort of triangular shapes is fit into the bottom left and top right corners of the page. The caption reads, “They moved, as it seemed to us, upon a cloud.” The top left-hand corner serves as the background of the image, depicting the silhouettes of two fighting machines slightly tilted as if moving over a landscape with scattered trees. The rest of the image shows the curate and the narrator standing in the woods. The curate is in the foreground, facing away from the fighting machines and covering his face as if he is afraid. The narrator stands behind him, looking back toward the fighting machines in the distance.