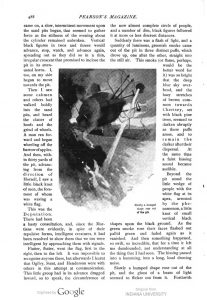 This image is a facsimile of page 488 of the second installment of The War of the Worlds as it was published in Pearson’s Magazine in May of 1897. The middle of page 488 is a large portrait-oriented rectangular illustration by Warwick Goble. The image bears the caption, “Slowly a humped shape rose out of the pit.” The bottom of the illustration fades out slightly into white space to accommodate the caption, which is presented in the lower right-hand corner of the rectangular space. The image depicts the body of a Martian fighting machine rising up from a hole in the ground with a round device raised and pointing toward the ground outside of the pit. A visible beam of light or energy—much more visible than those by Cosmo Rowe—issues from the device and connects with the ground. The ground has burst into flames at the point of contact, and dark black smoke flows up into the top left-hand corner of the image.