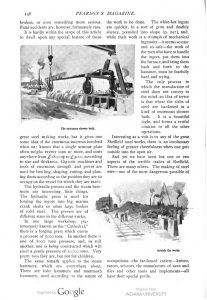 This image is a facsimile of page 298 of the March 1897 issue of Pearson’s Magazine. There are two illustrations by Warwick Goble on 298, both of which are roughly shaped as landscape-oriented rectangles. The first image is positioned on the left-hand side of the page, a few lines down from the top and intruding slightly into the right column. Its caption reads, “The enormous shower bath.” The image depicts a large outdoor machine that resembles a rectangular prism from its side, with water flowing down out of its top. A large pipe runs across its top, and a metal frame hangs over it. There is a large wheel along a side railing of the rectangle, presumably to keep material moving through the water. A large tong- or claw-like tool hangs down from the frame on a metal chain. In the far background, smoke rises from tall chimneys over small buildings. The second image is captioned, “Outside the works.” In the foreground, railway-style tracks run back toward a building with a tall chimney in the top left-hand corner and out to the right side. Several men stand on the tracks, seeming to talk to one another and another man farther back. In the top right-hand corner stands a tall tripod framework among other buildings with tall, smoking chimneys.